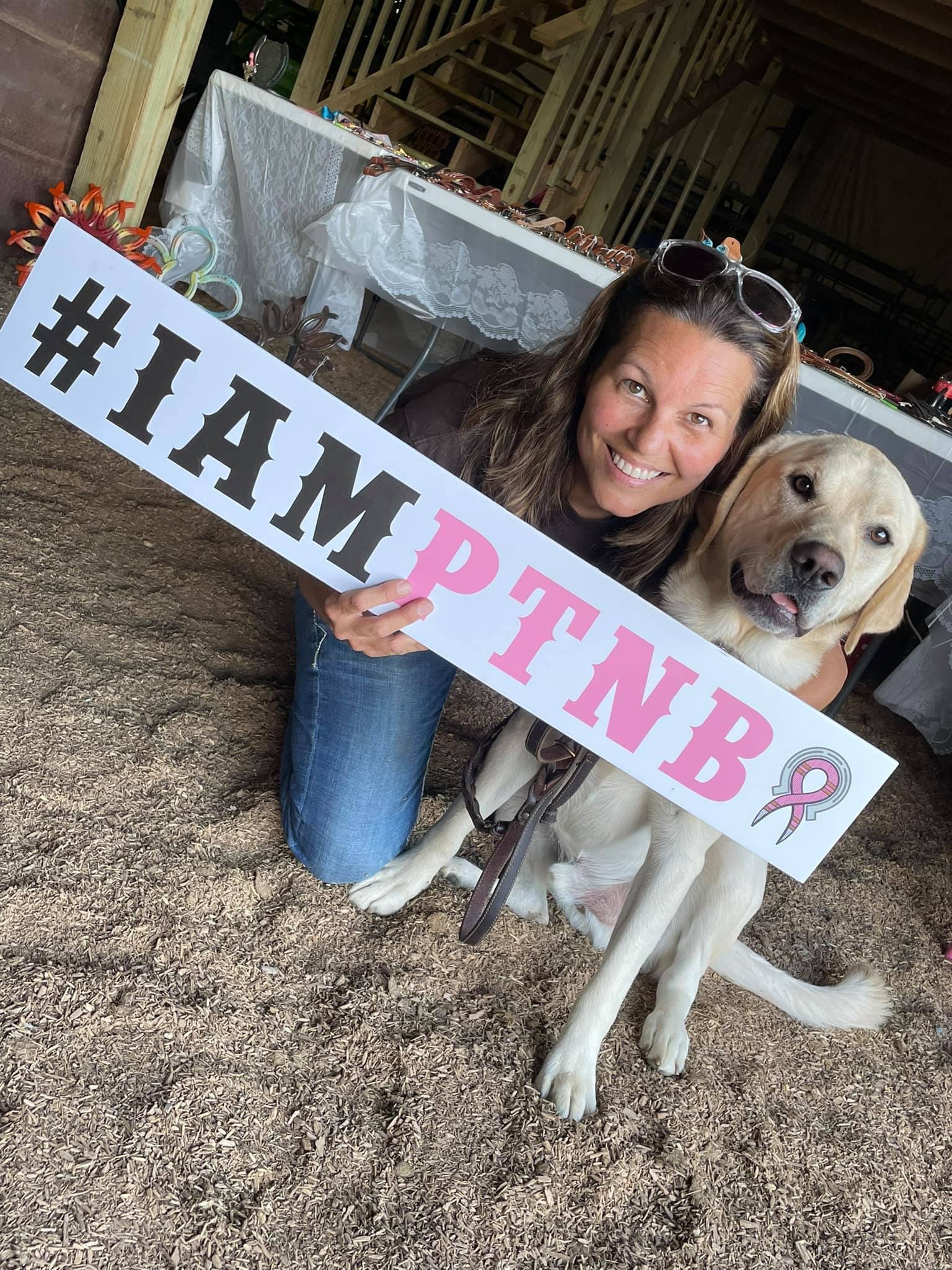 Hi, my name is Kimberly Moss but most everyone calls me Kim. I am currently on the board as the Junior Board member and enjoy being a part of this team. I have been a member of POTC for about a year and a half now. I live in Pekin but grew up on a farm out in Trivoli and have always had animals. I’m married and have 2 boys, both in their early twenties and starting careers of their own. They both have dogs and have taken them through puppy and manners classes here at POTC.

I have 1 dog, my travel partner, my yellow lab, Boudreaux, better known as Boo. We started out in Manners class after Covid shut everything down so we missed out on puppy class. We have taken a couple other classes after that but mostly Boo and I participate and enjoy obedience and agility but would like to dip our toes in a few other areas to try new things. We are just getting started. My other passion besides Boo is barrel racing horses. I have 4 horses that I train and give lessons on as well. I’m also working with my miniature pony to train for equine therapy. Between the horses and my 1 dog, I keep pretty busy.

I work part time as a lab technician and part time as an Equine and Canine Sports Massage Therapist. I love helping animals of all kinds, but these 2 are my true passion. Being a part of POTC family helps to expand that passion and I’m excited to serve and do my part! 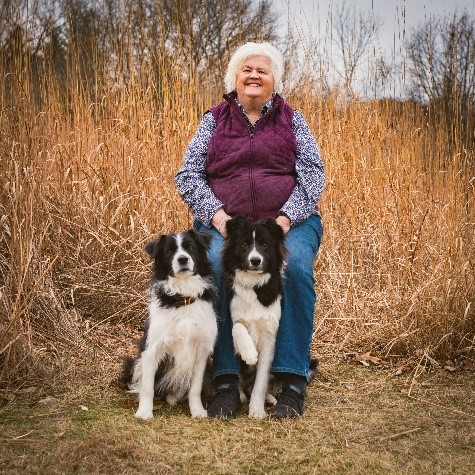 My name is Kathy Sours and I am currently serving as Secretary of POTC. I have been a member of POTC since 1969.

I have trained some of my dogs through many obedience titles, including an OTCH in obedience, finished several of my Border Collies to a conformation championship, earned titles in agility and rally and have recently been showing in nosework over several different venues.

I have taught and/or assisted in many classes at POTC – beginners, advanced, and dumbbell work. I have also instructed many 4H classes and judged them on the county level as well as the state level.  I have held the position of Treasurer as well as Secretary in the past for POTC.

I believe that every dog should be trained to some level in order to increase the bond between the owner and the dog.  Dogs should be well loved, obedient members of families.

Anne has been a member since 1964.  She currently trains Border Collies in obedience and canine freestyle.  Anne is a retired Registered Nurse and owner of Just Right Gloves, making gloves for the obedience competitor. 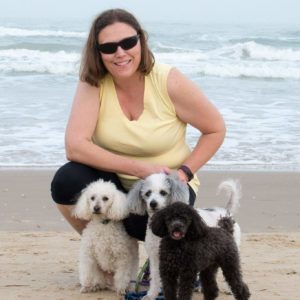 Linda Doerfler is an honorary member who joined the club in 1995 with her first obedience dog.  She has held various board positions over the years including secretary and director of training.  Linda is currently webmaster for the POTC website as well as trial secretary for various obedience/rally/agility events sponsored by the club.  She is also an AKC ACT evaluater for agility.

Over the years, Linda has trained and shown her toy poodles in obedience and agility across multiple venues.  She currently has three dogs at home including her youngest 4 pound toy poodle, who can be seen most weekends burning up the agility rings.  In her spare time, she is also a dog sports photographer, acting as show photographer for many different dog sport events.

I’m Angie Perrilles and I currently hold the position of Advisor to the Board for POTC. My first experience with POTC was a puppy class with my Black Lab, Sadie, in 2005. Due to my job at the time, I was unable to continue the fun. I trained her on my own at home but I knew she would be great at agility and other sports. I was finally able to join POTC in 2013. At that time, I also had Sawyer and Meadow, two of Sadie’s pups. Sadly, we suddenly lost Sadie in August, 2017. This past year we have given a home to Cabela, another one of Sadie’s pups.

We have been involved in POTC’s agility, rally obedience, canine freestyle, tricks and flyball activities. Outside the club, we are also involved in dock diving and a frisbee League. We have hopes of starting nose/scent work, barn hunt and obedience. We have earned titles and championships in AKC, UKC, WCRL, NADD, NDAL, WCFO, CPE and K9 Frisbee Toss and Fetch.

Since joining POTC, I helped with Puppy and Manners classes for about a year and have been the lead instructor in Manners since 2015 in addition to Rally in 2019. I have also helped with the introduction and instruction of the Therapy Dog Prep Class as I have had two Certified Therapy Dogs (Sadie and Meadow). I enjoy helping handlers with young dogs who need help reinforcing basic manners, as well as older dogs who may have never had proper training.

When we aren’t at the club, I am busy at work as an Athletic Trainer/Physical Therapy Assistant at OSF Rehab (formerly Great Plains Orthopedics). I have been a St. Jude Memphis to Peoria Runner for 21 years and I have served on the Peoria Humane Society Board since 2011. I enjoy being involved in various groups and activities. POTC has become a second home to us and is one of our Happy Places! 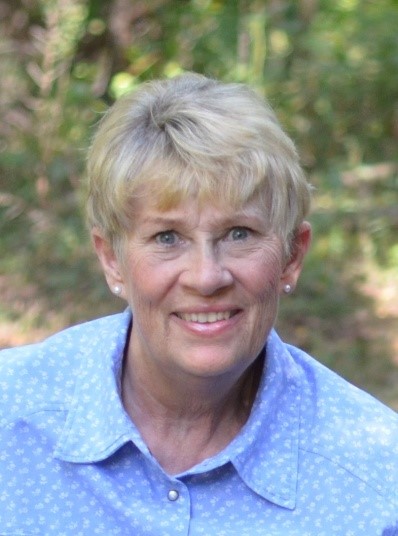 My name is Judi Gullickson and I’m currently serving as Director of Training. I started training dogs at 9 years old and began a successful Obedience show career at 11 years old.  I’ve owned and trained a variety of breeds over the years, both large and small. I became a member at POTC in 2006.

I have trained my dogs through the Utility level in Obedience, the Master level in AKC Rally, the Grand Champion level in UKC Rally, the ARCH level in WCRL Rally, and the champion level in WCFO Canine Musical Freestyle.  In the past 11 years, I’ve has earned multiple titles on my current five Shih Tzu, which includes AKC and UKC Obedience and Rally, TDAA Agility, UKC Conformation, and Canine Musical Freestyle. Each of my dogs has the Canine Good Citizen title and a variety of multiple titles.

Currently, I teach Obedience for Pets and Performance, Freestyle, and Rally. Two of my dogs currently compete in Obedience, Rally and Freestyle.

It’s my belief that every dog needs and deserves a good education, and training your dog creates a stronger bond between owner and dog, and a well-behaved companion, family member, and member of the community.

Kim joined the Peoria Obedience Training Club in 2015 after adopting an American Staffordshire/Sharpei mix from the Stray Animal Midway Shelter in Hanna City, naming him Grif, and realizing that she and her dog needed some obedience training. Within a year Kim rescued another dog, a Brittany/Terrier mix, from the ARK in Lacon and named her Ruby. Running Ruby Rose now participates in agility after attending Obedience 1 and 2 classes, plus the Beginner Agility and Advanced Agility classes. Kim has helped with maintenance in the building and decided to use her accounting skills as the Treasurer and was elected to the Board in January 2019. Kim is retired and likes to fish, golf, and whatever else she wants to do with her time when not busy with her two beloved dogs who are the true owners of the household. Kim also volunteers for the Central Illinois Center for the Blind and Visually Impaired where she sees guide dogs working to help their blind owners. This is not Kim’s first experience with the Peoria Obedience Training Club. Years ago in 2002, Kim brought her dog, Rose, a lab mix, so that they could get trained. It was that positive experience that brought Kim back with her current two dogs.

My name is Linda Locke and I have been a member of POTC since 2012 with my two dogs Maggie (8) and Beau (5), both Australian Shepherds. I am active in flyball, agility and freestyle – active is the key word… success has yet to be determined! I love playing with my dogs and the bonds that training and competing create together.

I am currently employed and own the company my husband and I created: ShareBuilders Inc, and am looking forward to pulling back on my hours at work in the near future. It is a software company for the media industry and my days are filled with client conference calls giving advice on best practices for media sales and inventory management. I also tackle various administrative duties such as: payroll, invoicing, contracts, taxes, and other mundane necessities involved in running a business.

The reason I joined POTC was to learn agility after I got my spunky little Aussie, Maggie, who needed a good outlet for her energy. We were invited to join the flyball team after some members saw her intensity level. And we got involved in freestyle after hanging around after assisting with an obedience class and thought it was a nice, creative outlet as being another means of playing with my dogs.

My name is Susan Sherwood and I am honored to be the President at POTC. My husband Larry and I have been members since 2017. We live near Elmwood with our three Australian Shepherds: Tyrion, Oliver, and Charlotte. Like many of our members, we started at POTC in a puppy class just trying to get our newest family member off to a good start. We chose to apply for membership at POTC, because it had a wide variety of classes and the instructors showed us that the possibilities for our dogs were endless. Since we became members, Tyrion has received titles in obedience, tricks, and freestyle. Oliver has titled in tricks, freestyle, and CGC. While I do enjoy competition, one of my favorite activities is taking Oliver to perform at nursing homes as part of the Barking Ballroom.

In addition to training our dogs, Larry and I have been active members at POTC. In the past I have served as the purchasing agent, as well as the unofficial assistant to the Director of Training. I have assisted with several trials and classes. I am also the current President of The Barking Ballroom.

Outside of POTC, I am employed by Illinois Central College as a Program Coordinator. I have nearly 20 years of coordination experience for a wide range of populations and educational programs. My responsibilities through my employment have also included budgeting and records management.

I take great pride in my involvement at POTC, and I look forward to sharing my passion and experience as President at POTC.